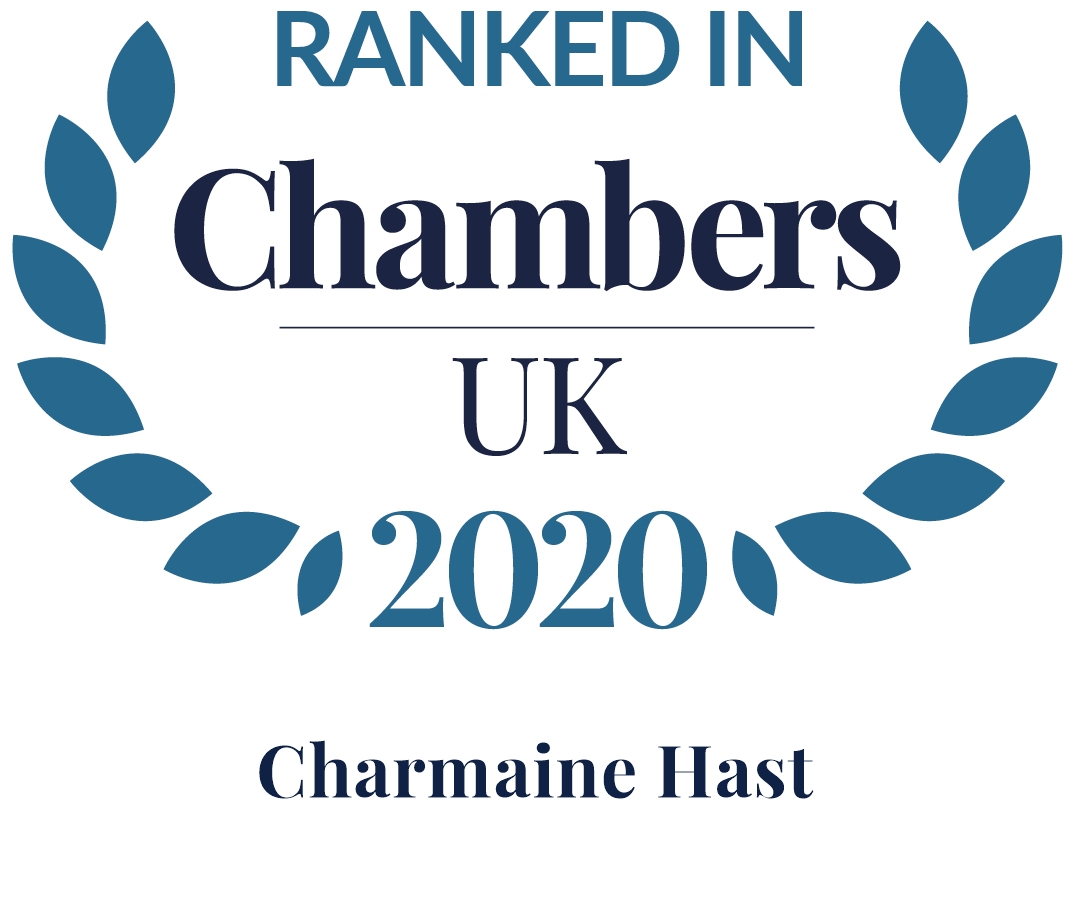 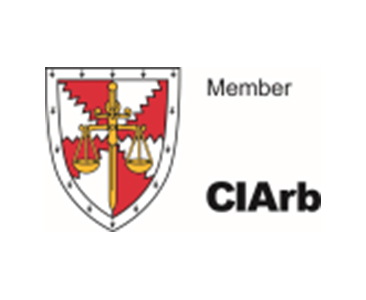 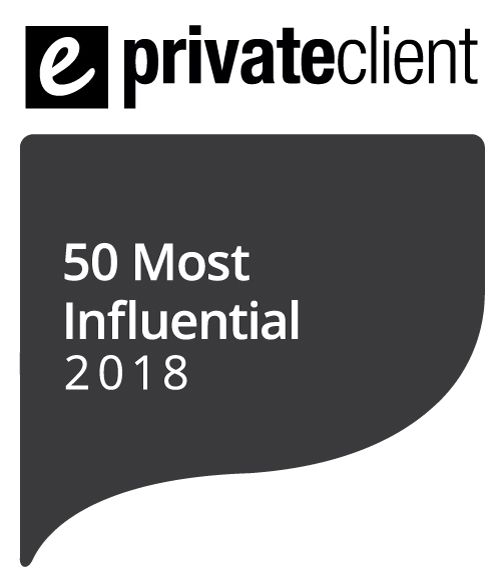 Charmaine is regarded as an expert in English Family Law and is one of the few Family Solicitor finance Arbitrators (CIArb) which means she is able to hand down binding judgments in family law money matters.

Charmaine has the benefit of BA (Psychology) and LLB degrees.

Charmaine has been named in the Spear’s 2020 Index, listed as a leading individual in Legal 500 and is individually ranked in Chambers UK.  She is the only family solicitor to ever be listed on the ePrivateClient’s 50 Most Influential Solicitors.

She has particular experience and expertise in advising on big-money and big-name divorces. She is able to advise on cross-border money matters and has a particular interest in trusts and pensions. Her practice covers divorce, separation, civil partnerships, pre and post-nuptial agreements, co-habitation agreements, children issues, abductions and international law.  She works with the leading Family Law silks.

Charmaine is always conscious of the need to combine the legal and psychological factor to facilitate advantageous results in these financially trying times.

“She is extremely experienced and she understands how to sort out cases. Her work is always interesting and varied – a lot of inter-jurisdictional work. Her gift is with the clients, she is fantastic with them. Once you have her in your corner clients are going to be OK. Tactically she is very astute.” Chambers UK, 2021

‘Charmaine Hast is a high-profile lawyer with a big presence on the international scene. She brings in excellent work and has a real feel for tactics in big-money cases’. Legal 500, 2021

‘The family law department at Wedlake Bell conducts some of the biggest and most complex of financial family law cases. It has a wealth of experience and is led by one of the family law’s greatest tacticians, Charmaine Hast’. Legal 500, 2021

Charmaine has represented a vast number of public figures including pop stars, actors and actresses, members of parliament, well known sports men and women, TV personalities, entrepreneurs, medical practitioners, bankers, accountants and other clients who require efficient no nonsense financial advice. She makes every endeavour to ensure that she receives no publicity from these representations, in deference to the clients’ need for confidentiality during a period in their lives of emotional and financial turmoil.

She currently leads the family team at Wedlake Bell which she established in November 2011. She previously established and headed a former Legal 500 number one family department in the South East. She is a member of Resolution (formerly Solicitors Family Law Association) where she was one of the first accredited specialists in high net worth financial matters and child abductions. She is a past trustee of Surrey Family Mediation and a former Vice Chairman of the British South African Law Association.

As a member of the Chartered Institute of Arbitrators, she is able to guide clients, where appropriate, to a more speedy and cost effective manner of adjudicating matters rather than to resort to the court process which can be protracted, public and extremely stressful.

In March 2015, Charmaine was widely quoted on the Wyatt post-divorce pay out, including: BBC News, the Press Association, Mail online, the Evesham Journal, Stroud Life, the Western Daily Press and the Tewkesbury Admag alongside interviews for BBC Radio Five Live, ITV, BBC, and many other publications.

In March 2017, Charmaine addressed The Law Society of The Northern Provinces in Johannesburg, South Africa incorporating The Gauteng Law Society, Limpopo Law Society, Mpumalanga Law Society and the North west Law Society. The subject was Part 111 provisions of the Matrimonial and Family Proceedings Act 1984 English Law and how foreign consent and divorce judgements are dealt with in the courts of England and Wales. The title was ‘Is your foreign court order unfair and can it be set aside in England?’

In October 2018 she addressed the Bev Clark Seminar on Family Law in Johannesburg, South Africa.

Charmaine has a number of reported cases in South Africa and England and Wales.

In February 2020, Charmaine addressed the First National Bank trustees and advisors in Sandton , South Africa on Trusts  and  Divorce in England and Wales.

Charmaine having read a degree in psychology prior to her law degree has a particular interest in the various psychological traits which contribute towards relationship breakdowns:

This disturbing condition is when one experiences extraordinary difficulties in dealing with life regardless of whether it relates to how other people deal with things or how the patient perceives the world. Anger, paranoia and even feelings of suicide are experienced by these patients who have insecure relationships.

It is a tragic feeling of being useless and can include thoughts of suicide. Depression should not be left to smoulder and help should be sought without delay.  Clinical depression can become manic depression and may even result in bipolar tendencies.

Narcissistic personality disorder is usually found in people who lack confidence but display over confidence, lack of empathy for others and the need for attention. This disorder causes unhappiness and disappointment as they think they deserve more and they find their relationships unfulfilling.

This is the general inability to experience feelings of emotion.

This is when a person is conditioned or groomed into believing that his/her perception of reality is without foundation.  The retort “you are letting your imagination run away with you”  is usually evidence of this. Once an abusive partner has broken down the victim’s ability to trust their own perceptions, the victim is more likely to stay in the abusive relationship.  Gaslighting tends to happen very gradually, the abusive partner’s actions may seem like just a harmless misunderstanding at first. Over time, however, these abusive behaviours continue, and a victim can become confused, anxious, isolated and depressed, while losing all sense of what is actually happening. Then, the victim may start relying on the abusive partner more and more to define reality, which creates a very difficult situation to escape.

Psychosis and neurosis are subjects which require more than a simple explanation.

Charmaine has a number of reported cases including:

* These cases were appeal cases which were successfully appealed.

"An outstanding practitioner, hard as nails when it counts. Soft as a feather when needed. A great character of the matrimonial legal world. A truly unique person. One of the top flight of matrimonial solicitors bringing a rare degree of commitment, judgment and intellectual acuity to this most demanding area of law. Her clients like her dedication to their causes."

"Charmaine has 'quite a formidable reputation' as a highly experienced family lawyer. Peers commend her litigation skills and links with South African clients, decribing her as a 'master strategist'. 'She's always thinking about the next step and where the case is going. She never get caught by surprise.' "

""The ‘hugely experienced and knowledgeable’Charmaine Hast heads the team and is ‘never phased by anything and has seen it all before’." "

""She's got a huge amount of experience but she's not afraid to try different things in a case.""

""Commentators describe her as "fantastic with clients and a really good tactician,""

"Charmaine Hast is highly regarded for her ability to handle complex financial litigation, as well as her strength in collaborative proceedings."

"Impressed sources describe Charmaine Hast as a "great tactician" who "really knows how to call the shots"."

Did my ex-husband hide assets in our divorce settlement? Charmaine Hast comments for the Financial Times

Family business wealth and protecting it on divorce

Charmaine Hast is mentioned in the Spear’s 500 index

“Why is London the ‘divorce capital of the world’?” – Charmaine Hast comments for The Financial Times

Charmaine Hast’s comments are published in The Law Society Gazette